Offering a live demo of the AirLive IoT Smart Home products in a small scale setup, with Voice and App control. 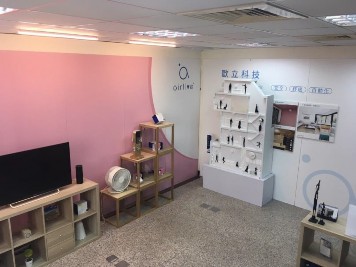 The devices needed are a Gateway (SG-101) this is the heart of the system and always needed. Other devices which we will be used are Sensors and Actuators. The Sensors will detect and the Actuators can do an action. These two work together via the setup in the app. The AirLive SmartLife plus app is the main controller of the Smart Home System. 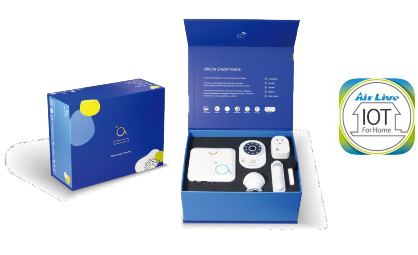 For the deployment to build up the demo room the Airlive SG-101 Gateway was used.

This Gateway is using Z-Wave technology and also has Wi-Fi build inside as extra AP in the network. Z-Wave technology uses a sub 1 GHz band which makes it easier to go through walls and there is no interference from Wi-Fi, Bluetooth or ZigBee which are in the busy 2.4 GHz band. The Airlive Gateway with its Z-Wave technology also works well with other 3th party devices making it an all-round multipurpose device. In building up the demo room other Z-Wave devices are also needed like sensors and actuators. In this case the Airlive 3in1 door/Window, PIR motion, Flood and Smoke sensors are used. For the Actuators Several Smart Plugs are used as well as the

In-Wall Switch and In-Wall Roller Shutter. Extra devices used include the IR Controller, Panic button and Smart Button. To setup all these devices the Airlive SmartLife Plus app is used. To operate the demo room again the app is used as well as Alexa voice control via the Echo speaker and Google Assistant via a Smartphone.

In-Wall switch is used. This In-Wall switch is placed behind the original light switch. This will make the original light switch a smart switch because now the ceiling light in the demo room can be controlled by the app but also still at the same time by the normal switch buttons. Controlling the Curtain in the demo room, the demo room also has a curtain which is motorized this means we can control this curtain with the SA-103 In-wall Roller Shutter. The In-wall Roller Shutter is connected to the curtain motor. The app will now be able to open and close the curtain with the push of a button. For dimmer control a SD-102 Dimmer was used. This device again is very easy to place as it goes into the existing light fixture and the light bulb goes into the 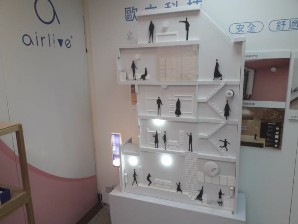 To make all the devices work together in the demo room the AirLive SmartLife Plus app was used. The App is free to download from the App Store and Google Play.

After the installation the operation is very easy. All that needs to be done was scanning the QR code on the back of the Gateway to add it to the app. It is also possible to add more than one Gateway to the app. After scanning the QR code of the Demo Room Gateway all the sensors and actuators can be added. This is a very easy process. Now for the setup in the Demo room. To operate the different devices the first thing that was done is to rename all the devices. This also makes it easier to know which for example Smart plug is connected to which light. Smart plug 1 when connected to the table light can be renamed to table light and so on.

For Automated control as mentioned before in the demo room we want to have automation by app and voice but also by automatic setups.

After renaming it was already possible to turn on and off the lights and fan via the app. But for sensor control a macro would be needed. Several macros were setup in the demo room. Being IF temperature (measured by the 3-1 sensor) is over a certain value THEN turn the fan on. Another Macro was IF light level is over a certain value THEN close curtain. In both cases the Sensor detected the set value and the actuator in the macro was activated. Several more macro’s were made in the demo room with the also the PIR motion sensor and Flood sensor. 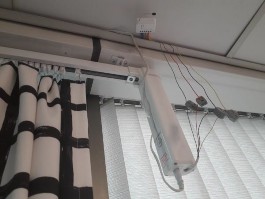 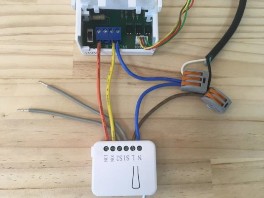 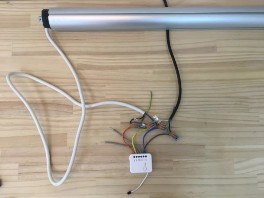 Voice Control; in the demo room an Alexa Echo speaker was placed for Voice Control. The setup of voice control required the connection of the Gateway to the Cloud. This was done in the app. were after the following setup needed to be done via the computer as login to the Amazon account of the Echo speaker was needed. For Alexa the skill needed for voice control with the Gateway was loaded. After this Alexa was able to control the connected devices in the demo room. The table light could be turned on/off by saying Alexa turn on/off table light and the same was possible for the other connected smart plugs and in wall switches.

For Google voice control in the demo room a smartphone was used with Google Assistant. The setup which was needed was similar as with the Alexa setup so a first the cloud connection needed to be made. After this the Airlive service in the Google Assistant was selected to link the gateway. Now Google showed all the Smart plugs and Switches. In the demo room it’s now possible to say Ok Google table light on/off. 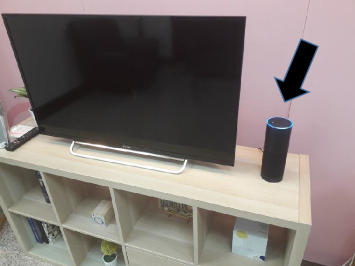 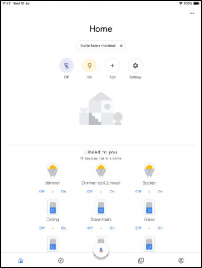 The setup of a demo room with Airlive IoT product was very easy and did not require a lot of time. The first part of the setup is to see which devices in the demo room we wanted to automate so as to know how many IoT devices were needed and which ones to use. Installation of the sensors and smart plugs did not require any special knowledge, placement and adding to the gateway was done in a matter of mins. For the In-Wall switches and Roller Shutter these devices did need some knowledge of electric wiring but ones connected were easy to operate. For the full control the Airlive SmartLife Plus app did the job and showed all the devices in the demo room and we were able to setup scenes and macros. Voice control made the demo room complete with an Alexa Echo speaker and Google Assistant smartphone. Lights were able to be turned on and off via the app and via voice control. When newer products are coming out they will also needed to be placed in the demo room, it will be easy to add them to the gateway using the app. This way the setup can keep being expanded. 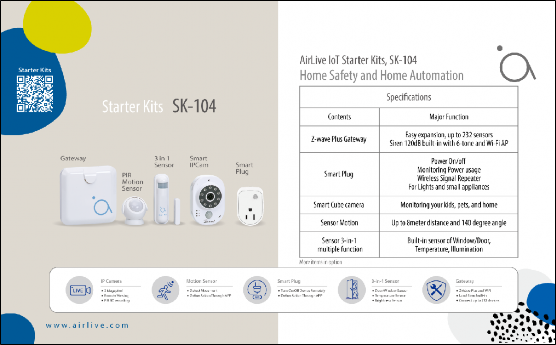